Another round of the A to Z Challenge is OVER! My theme was:

The story outline started with a dream I had. (I'm the dreamer.) It's a dystopian setting.
Writing a short story on the fly sounded like a *good* idea. I would not do it again during A to Z. The first week went okay. I had time to write the story as well as comment on 50 blogs.
But then things went wrong in my life. Regular followers know that, after L, I fell behind. My friend is doing much better. Thanks to everyone who cared and gave prayers, good vibes, and well wishes.
We were sitting around waiting for him to get out of surgery number two. (We had food with us this time. Unlike surgery number one, where we scrounged a nearly empty vending machine and ate my supply of pocket jerky. Fun fact about J, I almost always have jerky stashed in my pocket.)
He came out fine, and then we left. In the parking garage, I heard an engine rev. Hairs on my neck and arms stood up. I shoved my spouse to the side before getting grazed by the truck and slammed into a concrete post.
Yes, they caught the driver. He claimed it didn't happen. And he doesn't know how some of my hair was hanging off his SUV. Oh, the security camera? Whoops. Didn't think about that, did you?
Anyway. So I didn't die on April 30. But it was closer than I'd like. I'm a little injured but I will be fine. My spouse is fine, but is less than thrilled with the idea of my going on vacation (hiking alone in the woods) by myself in a few days.
Hey, wanna see a funny? https://twitter.com/JLenniDorner/status/1520638145691324416 How I named the last character.
Here's a review of all the prompts I was given (comments, tweets, dm, email, and WEP).

I did very little planning. I knew I wouldn't show the world as a setting until I made the WEP post. I did not know that Quintilis would be in the Q post. I came up with that the day I wrote and posted it.
The "catch up" posts that were posted a few hours apart? I wrote them, did two edit passes, and posted. That's "live" writing time.

May Rose, July Ice, and Quintilis Cave -- May is so named because I looked at the names of months. "After Caesar's death, the month Quintilis was renamed July in honor of Julius Caesar in 44 BC"
And then I decided last names would be from vague descriptions of places. Rose is, of course, a joke, because the place has no roses and smells absolutely terrible.
During the I post, May talking to the reddish stone was still going to just be an inside joke. As people are the pets now, they don't really have domestic pets, so... pet rocks are cool again! But later I figured out that I could use the stone to help with the alien in the mind-space travel prompt.
I forgot about needing a shapeshifter. I didn't want to add another character at that point. None of the students could be shapeshifters because that would have come in the mind scans. So Piers got one more tool. He was already a baker who worked with the Dept of Homeland security thanks to a prompt. But what kind of shapeshifter could be useful? Well, I also needed an underwater scene yet. And then I found the story of a whale ingesting a guy and spitting him out elsewhere. But I also needed a storm that isn't weather, so yes, I added a hurricane that contains a wormhole.
Biggles was always getting the happy world at the end of the story. I dropped foreshadowing all over the story, but was very careful not to say Biggles or mention guinea pigs until the final scenes. The Chavín people were real! And lived in the same place that guinea pigs are said to originate from, the Andes area of South America, around what's now Peru.
I planned from the start that Jade would be Jade X, because that solved a title for a difficult letter. And I knew it would be "X" because May was to train an "alphabet worth" of classes-- because it's the A to Z Challenge and that amuses me. But, omg, using that as one last cliffhanger in the story by telling you that Jade X can't come to the new world... 😆
May starts off selfish in a way. She's grateful for what she has. She'll do anything to keep what she has. And if that means dozens of virgins from another timeline get turned into pets for alien overlords to breed, so be it. This could have easily been an erotic story if you consider the actual teaching that was going on. Anyway, by the end, May gives up everything for Jade. None of what she was so grateful for matters to her anymore. Does anyone notice the lack of a mention of plumbing on Biggles' planet Yeovil?
🚽🛀🚰🚾🐹

There were a LOT of great comments on my blog this month. I'm going to share a few favorites:
(I LOVE how many of you could relate to being ignored by motion sensors for lights, faucets, and doors, by the way.) 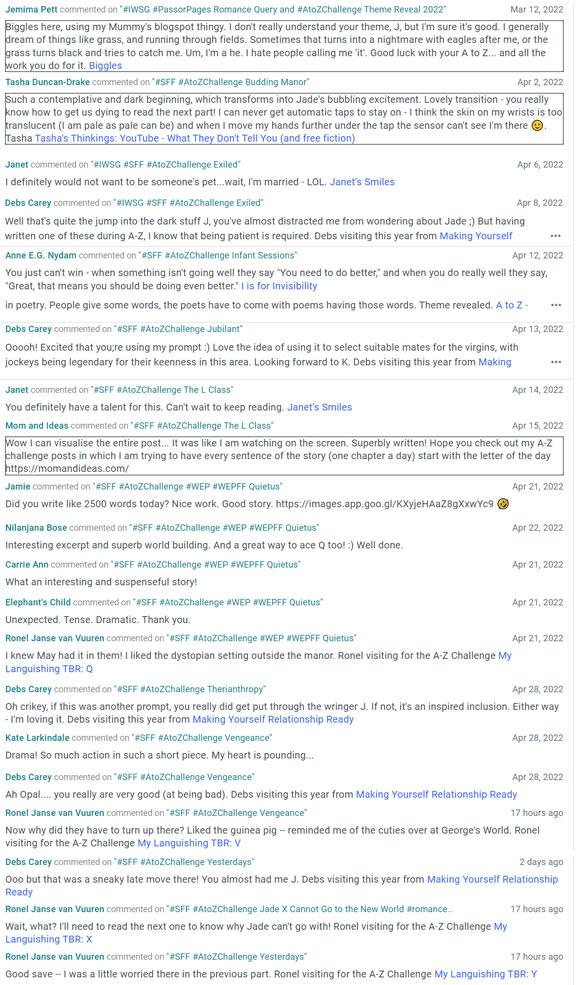