"One benefit of summer was that each day we had more light to read by."- Jeannette Walls, The Glass Castle

July 6 question - If you could live in any book world, which one would you choose?

I pick this book and world because of the trees. 🌳
It's a short read with a mystery told in modern times and the early 1600s era.

For my longer answer, I arranged a few books in the shape of my name - J.
(Hopefully, no one will confuse my name with co-host Jenni Enzor's. J isn't an abbreviation, I didn't know about the superfluous "ay" that people add, or that sometimes J is short for Jayson or other names. Lenni- Lenape means "original people". My tribe is also known as the Grandfathers. Naming customs are different in various cultures.)
BSC. I appreciate that the books are being redone with Graphix while still staying pretty true to the original books. Stoneybrook is a fictional small suburban-like town in the state of Connecticut. Most of the problems were solved in one book.
The Baby-Sitters Club books remind me of my youth. It was just such a better world than my own, a parallel universe of sorts where I wished I could be. Not that I had any interest in baby-sitting. A rare happy period in my school-age time when, for a brief while, I had friends. The Logan character helped to cement the idea that it was okay for the girls I knew to have a guy friend (me). Their parents disagreed. My foster caretakers didn't know or care. Things eventually went bad because of other males at the school. Resulting in my being hospitalized more dead than alive. At which point I was passed to a different foster home. (This is all before I ran away and found my people and birth parents again.)
So anyone out there saying the new laws in parts of America are fine because the foster and adoption system exists can kiss my 🍑ss. Plenty of people are talking about that.
I'll pause to talk about just how "pro-life" the American government has been for about two centuries. I don't often get political on social media, unless it relates to Native American issues, and this does.
https://time.com/5737080/native-american-sterilization-history/
Think putting abortion services in Federal places will help? 🎲 That's rolling the dice because those places sometimes sterilize people without their knowledge or consent. Especially Native American women.
https://www.niwrc.org/restoration-magazine/november-2020/past-and-current-united-states-policies-forced-sterilization
"On October 2, 2020, the United States House of Representatives passed a resolution condemning unwanted, unnecessary medical procedures on individuals without their full, informed consent."
House resolutions are not binding laws.
In case anyone thinks this happened long ago. 2020. Hasn't even been two years since the House did something. Though, what they did wasn't much.
It was after finding out some medical personnel at the ICE cages were sterilizing people who they deemed to be non-Americans.
For ten seconds, imagine a popular, well-liked American celebrity is shooting a film in another country. And, while in that other country, is captured and sterilized. And the other country says, "well, it wasn't one of our citizens, so it's okay." Try to imagine how well that would go over. American citizens getting forcibly sterilized in other countries.
Now imagine it's someone that is barely known at all. Doesn't matter where they're from. Is it okay now?
https://19thnews.org/2022/02/forced-sterilization-guardianship-reproductive-justice/
"31 states and the District of Columbia have laws allowing permanent forced sterilizations."
Some states will outlaw abortion, but have laws to force sterilizations.
https://givingcompass.org/article/forced-sterilization-is-still-legal-in-the-u-s
Surly the “"pro-life"” crowd has put a stop to forced sterilizations. Right? Nope.
There are some laws to prevent certain groups, like inmates, from being sterilized without consent. But there is NO LAW to prevent forced non-consensual sterilizations for all Americans.
So yes, in certain states, very soon, a person can be imprisoned for performing an abortion, and the person who had the abortion could be forcibly sterilized.
Ending one pregnancy will be outlawed. But preventing a person from ever becoming pregnant by sterilizing that person is still legal. (Again, depending on the state.)
The loss of the right to consent to carry a pregnancy will be new to many people alive today.
The loss of the right to consent to ever reproduce was taken from many long ago and is still being fought to get back.
In theory, medical malpractice and assault and battery might protect a patient from sterilization without consent. Unless the patient is incapacitated. And even then, consider that forced sterilization just happened in America. And that there are still laws that ALLOW it. But there do not seem to be laws that specifically OUTLAW it.
In case you wonder, some places also prohibit people from making the choice to be sterilized via "tube tying" (tubal ligation) or hysterectomy (womb removal). One in six US hospitals, it is estimated, refuse to perform such procedures as electives. Vasectomies, however, are easier to obtain. https://www.insider.com/a-woman-needed-husbands-consent-to-get-her-tubes-tied-2020-2 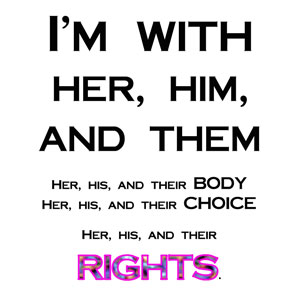 I feel everyone should have the right to decide when and if they wish to create offspring, and that no one should be able to take away someone's consent for the use of their own body. (Not a parent, spouse, officer, court, president -- NO ONE.) No additions or removals should be performed without informed, comprehended consent. I'm also strongly opposed to permitting child marriages or forcing victims of pedophiles to endure pregnancy. I have seen a child, not yet a teen, who died in labor. And no, that fetus didn't make it either. There is a sick, dark underworld of sex-trafficking and pedophiles who rely on places with relaxed laws that make it easier for them to carry on. I have seen the horrors of the dark world they run. I oppose their existence and any law or ruling that makes anything easier for them.

The following is from a scene in Stargate SG-1:

(LYA)
After careful consideration, I believe that both Klorel and Skaara have the right to live. But living as a host with no will of one's own is not life, therefore only one may remain in the body. To that end, I award priority to the original owner of the body.

Lya is of the Nox people. The Nox are an advanced, non-violent, wise people who use technology in harmony with nature and have existed since ancient times in the Stargate Universe.
As there are Stargate books, my third choice for a book world would be to live with the Nox. They feel like an evolution of my own Lenni-Lenape tribe, had history been different for Native Americans.


Thanks for reading! See you next time.

It would mean a great deal to me if you'd be kind enough to share that tweet, or go to the Operation Awesome site and share a post of your own somewhere. Please 🤍💗 too!
J Lenni Dorner (he/him 👨🏽 or 🧑🏽 they/them) ~ Co-host of the #AtoZchallenge, OperationAwesome6 Debut Author Interviewer, Reference& Speculative Fiction Author
Please, call me J.
Posted by J Lenni Dorner at 9:00 PM

Email ThisBlogThis!Share to TwitterShare to FacebookShare to Pinterest
Labels: #IWSG, about me, Lenni Lenape, Lumber of the Kuweakunks, Operation Awesome