#SFF #AtoZChallenge O'tien and the Overlords 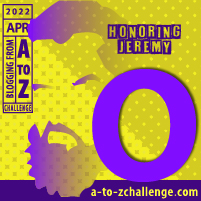 May locked Natica in the washroom. He said he'd swim a few laps while she was gone, acting as if he were more guest than a prisoner. Which, normally, he would be a guest. And treated with celebration.
Of course, this one only brought problems to the door. May rushed up the stairs to Opal's room.
"We have to talk." May enabled the privacy lock on the room.
"Am I getting a private lesson? Should I strip?" Opal grinned.
"Your mate showed up early."
"Oh. So, I really should strip? I was only joking before."
"There's a problem. You picked a sterile human."
Opal took a seat on her bed. "What? All those tests and no one did a sperm count?"
"Overlords are expected to do that on their own. They only bring the very best. Well, Shell didn't expect to win. Or for you to favor his man. And now he's here, and I have no idea what I'm supposed to do about it."
"And you're what, asking me?"
"No. I came to tell you. You are now informed of the situation. Overlord Nightingale has to be informed but is impossible to reach while traveling here. Once again, class X has a problem that has never happened before, and thus the manual lacks a solution!" May collapsed on Opal's floor. The weight of everything finally caught up.
~~~
Jade cracked the door open.
"Move out of the way," Opal commanded.
"I don't think I'm supposed to let you in when May isn't available."
Opal shoved the door fully open, knocking Jade out of the way. "Oh look, May's available now."
May's body was in Opal's arms, still unconscious.
"Grab a cool washcloth and meet me in the bed-chamber," Opal said. It took some time, but eventually, the girls brought May around.
"What's going on? Where am I?"
Opal stretched. "You passed out. I brought you here so Jade could watch over you. That certainly isn't going to be my job. Now, how do I talk to Nightingale?"
Jade rubbed the cool washcloth on May's head. "Do you have to start in right away? Can a person get some air? I don't know where you're from, but passing out isn't normal."
"According to May, it doesn't matter where anyone is from because everyone is dead and everywhere is gone. Of course, if we want proof, we have to risk our lives by going out the gate and never coming back. Oh, and there are alien overlords who we've never met. And the only proof of anything was from videos on a screen. The future I allegedly worked toward just got messed up. So, no, I don't think I will give anyone a moment to get air." Jade picked up a pillow and tossed it across the bed-chamber.
May kissed Jade's hand and took the washcloth away. "Overlord Nightingale is traveling, on the way here, and can't be reached before arrival. I have to deal with the guest locked in the washroom. He said he'd be swimming. How long was I out for?"
Opal shrugged as May stood.  Jade curled up in the bed.
"I have to go make other arrangements. Opal, you should return to your room."
"Hey, thanks for hauling me back here. Sure thing, no problem. Just let me know when you'd like to be carted around again!" Sarcasm flowed from Opal as she stormed out. May kissed Jade before heading back downstairs.
Passing out wasn't good. Barely eating dinner probably didn't help. Realizing this, May went to the kitchen. The baker was there, working on dough for tomorrow's meals.
"I need a bite to eat. This has been a rough day."
The baker pulled a muffin out of a box. "Remember earlier when I mentioned a secret?"
"Uh-huh," May said before taking a substantial bite.
"I'm in love. You thought pretending to be a baker was bad. Well, I'm also hiding a relationship with O'tien, an alien who travels only in the mind-space dimension."

May's eyebrow shot up. "Like a spirit or soul or some such ancestral nonsense?"
"My relationship with O'tien isn't nonsense. The reddish stone I gave you allows us to communicate with him, and also allows him to travel to our minds. When he's there, I can meditate to freedom."
"That'll do Jade a lot of good when our dead bodies are tossed out the gate." May spit bits of muffin wrapper at the ground.
"O'tien's race is at war with the overlords. Especially Nightingale. Do you know what I did before the world ended? Before the Devastation? I worked for a governmental public security agency called Homeland Security. I was undercover, trying to prevent what happened. After failing, I didn't feel worthy of life. I was actively trying to end my life when O'tien entered my mind. Sure, I assumed I was no longer sane. The moon was full three times before I accepted that his race exists."
"What convinced you? Because honestly, you don't sound sane right now."
"The reddish stone. It isn't actually a stone at all. You have to see it during a storm. Like the one that's raging outside now."

Question: Have you ever fainted?