My theme this year is blogging about my author brand. Tuesdays' posts are on Speculative Fiction. 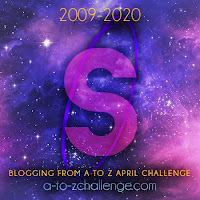 This was an okay book. I enjoyed some parts more than others. It wasn't exactly what I expected. There were some twists, but they were set up in such a way that I saw every one of them coming. (Or maybe it's because I'm a writer, so I know the setup?)

The book is listed as political fiction, which is a genre I don't often read. I would say it's more of a thriller or mystery. Except the mystery is not really solved by the end of the book. It leaves more questions than answers.

I would recommend this book to readers who like a mystery where they aren't sure how guilty or innocent anyone in the story is, and those who are okay with some adult content. (It mostly alludes to it.) But please know that it isn't wrapped up by the end of the first book. There is a tribulation in the book that includes a kidnapping and violent sexual encounter, which is referenced throughout the story in bits and pieces. That's a potential trigger for some readers. There are some romantic scenes that border on erotic. There are some fast-paced scenes. Mostly the book is just entertaining.

The book takes place in modern times and mentions the impact that social media has on our lives. One quote that I loved was "Now you tar and feather people with a Share button and a Like."

Then there are passages about living in isolation, going for long stretches without touching another human being. At the time I read this book, I knew what the author meant. But now, in today's world, a lot more of us can understand the feeling as well. (Thanks, Covid. 😟) I purchased this book on August 18, 2018, but started reading it in January, 2020.

The explanation of the words "shame" and "shameless," how they're insults to make someone seem less human, were really impressive. It also gave meaning to the title. The part about not being able to pee when stressed was very insightful. Descriptions of a rotary phone and cursive handwriting were funny, but also evidence that this story is aimed for a much younger audience than myself. (I'm Gen X. Not as old as a Boomer, not as young as a Millenial or Gen Z.)

I read this whole book hoping to find answers to the mystery (mostly why it happened, partly what exactly actually happened). I haven't decided if I'll read the other two books to figure it out. (There are quite a few books on my TBR that I want to read more.)

I'm not sure what byzantine details are, but suspect it's supposed to be bizarre details. I believe that Alice is the author's favorite character. She's certainly the most enjoyable one to read about.  Alice's home was the only setting that really came alive for me. The book did have plenty of obstacles for the main character.

Has your age (or generation) ever had an impact on the enjoyment of a book you were reading?